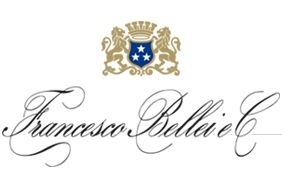 The winery is located at the larger estate in the hamlet of Cristo di Sorbara, in the municipality of Bomporto, the cradle of Lambrusco di Sorbara.
The property is now owned by the Cavicchioli family, award-winning wine maker and renowned producer since 1928, has acquired the property and continues to follow in the founder's footsteps.

Surrounded by vineyards, the winery consists of the vinification and aging areas where the bottles, placed to age on the lees for several years, are kept at an optimal low temperature during the summer, to avoid seasonal shifts in temperature.
Aging areas for natural fermentation inside the bottle
Bellei's Lambrusco

In the past, grapes were stripped and pressed, and the grape musts, which would immediately start to ferment, were drawn off from the lees after 2-3 days. The new wine, still containing residual sugar, was transferred in February-March to green or brown bottles of robust glass, and sealed. Often the cork would be tied with a string to prevent it from opening before its time at the pressure of carbon dioxide that formed inside the bottle, making the Lambrusco sparkling. At the onset of the summer heat the wine was already ready to be enjoyed with its purple mousse capable of filling up the glass bowl in an instant.
The characteristics that have made Lambrusco world famous, like other high-profile sparkling wines such as champagne, are due to the cork which makes it possible for the Lambrusco to remain tightly sealed until uncorking and retain inside the bottle that carbon dioxide, produced by the fermentation of sugars, that is responsible for transforming it - in the span of a few months - in the sparkling red mostly appreciated worldwide.

In the early 70s, the desire of having a Lambrusco di Sorbara without the torbidity upon serving characteristic of second fermentation in the bottle, prompted Giuseppe Bellei to take several trips to the Champagne wine region where he studied at the best institutions and maison at a time when the Champenoise Method had reached high levels of quality.
Thus the birth of BRUTROSSO Metodo Classico, which after bottling and aging on lees for many months undergoes the manual procedure of remuage sulle pupitres followed by degorgement.

In the 2000s, the ancient method of second fermentation in the bottle was reinterpreted with Lambrusco Ancestrale, to recover the natural sensations of aromas and flavors from times past. It consists of a second spontaneous fermentation inside the bottle of the wine with natural sugars and yeasts.
The problem of cork taint that had at times compromised the optimal preservation of the wine had been solved with a crown top already in use for aging by the Classic Method; this solution has proved to be effective to achieve optimum fermentation and maturation with the Ancestral Method.